Test and Tag is the descriptive name for the process of visually inspecting and then electrically testing in-service electrical equipment for safety. It is also referred to as; tagging, electrical tagging, appliance testing, portable appliance test or lead tagging.

The reason for the Test and Tag process is to determine as closely as possible if the appliance is safe for use. In Australia and New Zealand, this is done using the Standard; AS/NZS 3760:2010 “In-service inspection and testing of electrical equipment” as a reference document.

The appliance undergoes a visual inspection for defects or damage, such as: cuts, burns, bare or exposed wires, damage to the plug or socket, damage to the tool or appliance such as missing safety features, cracks and any physical damage, then we check it with one of Australia's most advanced Portable Appliance testers to check for such things as correct polarity (Wiring) earth continuity, (Ensure the safety earth works as it should) insulation resistance and checks for any leakage. We also check RCD’s to ensure they will trip safely and protect you as designed, and we can check your Microwave oven for possible leakage or damage to the protective barrier.

Example of item being tested. 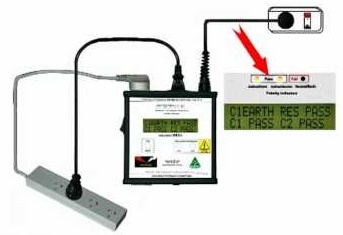 Our tests are carried out as directed in the Australia and New Zealand, Standard; AS/NZS 3760:2010, as well as the guidelines and laws set out by WorkCover or Safe-work Australia.

Electrical safety and regular inspections of your electrical tools, appliances, power leads, extension leads and all other workplace and home electrical equipment are not to be taken lightly.

Each year in Australia there are far too many workplace related deaths caused by electrocution and hundreds suffer serious injuries, the number has been greatly reduced since the Test and Tag process began, but electrical safety is still a major problem and requires constant vigilance. Apart from worksites and factories, many more are killed or seriously injured in offices and home based businesses. Most of these could have been prevented with regular Test and Tag inspections.

This is why it is now law that most businesses, contractors, sole traders operating in a working environment, must have a regular test and tag check performed on their electrical equipment if they want to be compliant with the AS/NZS 3760:2010.